Making Pie in the Microwave 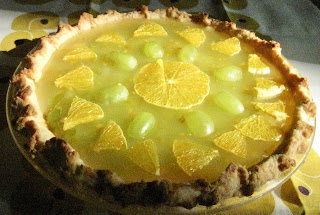 Yesterday was one of my grandson's fifth birthday. He had told his mom he would like a pie instead of cake (a typical request in our family) but he couldn't decide just which kind, so maybe he should just be surprised.


Xavier loves fruit, so I knew that we'd go in that direction for a filling. Then, because we'd have quite a few family members sharing dinner, I knew that two would be better than one; now, to decide on two choices that would be economical, welcomed by all...and a surprise.

The first choice was not really a surprise--raspberries from the backyard are almost ubiquitous on the dessert menu. Even though we are in the month-long gap between crops, there are plenty of berries in the freezer to draw from, so that would be one of the pies.

Green grapes are on special this week at almost all the stores, some for as little as 88 cents a pound. That brought back memories of a pie I first made decades ago and hadn't tried for years. This time I decided to update it using the microwave, and the result was a pie that was impressive in its appearance, better in its flavor and, best of all, relatively inexpensive and easy.

Each of the pies was cut into twelve thin wedges, just in case anyone would like to try a bit of both; good plan, as the dual option was the choice of everyone at the party. The red and green slices on the plates were festive and could easily be duplicated in December for a Christmas color scheme.

Some Miscellaneous Hints to Remember:

Don't be put off by the multiple layers of the grape pie; You can use the same bowl for both the custard and the glaze if you scrape it well first.

I have found that thickening flour or cornstarch mixtures in the microwave is far easier than on the stove top, with fewer lumps and consistently smoother consistency. Just a couple of things to remember--be sure to use no more than MEDIUM power and stir often.

And, whether on the stove top or in the microwave, the method for mixing eggs into a hot custard is always the same--have the eggs beaten enough that you can no longer see uncombined whites and then pour a little of the hot mixture into the egg. Stir this together well before adding it back to the rest of the hot custard. If you just pour the egg into the hot mixture, the egg begins to set as soon as it hits and you are likely to have little bits of "scrambled egg" lumps throughout your custard. Learn this little trick (which really takes no more time or bowls) and you'll be on your way to making lots of wonderful sauces without fear of lumps.

1. Stir the flour and sugar together in a large microwave-safe bowl. Gradually add the orange juice.
2. Microwave, loosely covered, on MEDIUM power for about 2 to 2 1/2 minutes, stirring about every minute or so. The mixture should boil up and become thick.
3. Beat the egg with a fork just enough so that the egg yolk and white are thoroughly mixed.
4. Pour a tablespoon or so of the hot orange juice mixture into the egg and stir to combine. Pour this mixture back into the rest of the orange juice mixture and return it to the microwave. Cook on MEDIUM power another minute, or until the mixture once again begins to bubble.
Set aside to cool.

Stir the sugar and cornstarch together and then gradually add the water.
Microwave on MEDIUM power for about 2 minutes, stirring several times. The mixture will boil up and become translucent. Set aside to cool.

1. Pour the cooled custard into the baked pie shell.
2. Lay the grapes, cut side down, in concentric rings, over the pastry. Place the grapes so that the custard is completely covered.
3. Pour the glaze over the grapes.
4. Wash the orange well. Cut it into quarters and then thinly slice the quarters. Place around the edge of the pie.
5. Chill well before serving. Store in the refrigerator.

This raspberry pie also uses the microwave and is a good one any time you have raspberries in the freezer. Could you make it with fresh raspberries? Of course. Just put raspberries in a cup and then add water around them to come up to the one cup measure. Cook for a few minutes until the berries have released all their juices and then proceed with the recipe.

1. Combine the sugar and cornstarch, mixing thoroughly.
2. Measure 1 cup of the juices of the thawing raspberries into a large microwave-safe bowl. (If you don't have quite a cup of juice, you may add a bit of water to reach the one cup level.) Gradually stir in the sugar and cornstarch mixture.
3. Microwave on MEDIUM for 3 to 4 minutes, stirring occasionally, until the mixture bubbles up and is thick and translucent. Remove from microwave and stir in the lemon juice. Allow to cool for a few minutes.
4. Fold the remaining berries into the cooked mixture and pour into the prepared pie shell. Chill before serving.
Posted by hl at 7:52 AM